When I was a senior in high school-I volunteered at the Sweden Senior Center in Brockport. Every Thursday I looked forward to seeing Jim and Luella... I wondered how they are doing.... :) This article was in 2005 but you get to see how stinkin' cute they are! It tells you how they met! :)

He got the 'point'
For Jim Higgins of Brockport, true love hit him a second time around and it all began with a point.

After his wife of 55 years died in 2000, Higgins kept himself busy playing golf and going to the VFW in Holley but all of that changed when he decided to check out the Sweden Senior Center in Brockport.

"The first day I was there I sat at a table with five ladies," he said. "After I'd been going there a few times, I heard a rumor that there was a lady who was interested in me."

That lady was Luella Jennejohn - a widow of 17 years.

"Well, the next time I went there she turned around and pointed at me. I pointed back and that was our introduction," he explained with a laugh.

The couple's first meeting was in 2002, they dated for about eight months and got married on Valentine's Day in 2003.

Jim and Luella are both in their mid-80s and they say they are very busy people who are always on the go and always see a lot of people.

When asked what the secret to their happiness is, Jim said it was compatibility. "We're very much wrapped up in each other," he said. "We just sit and talk and laugh and sing and go to church together."

Luella said another key ingredient to their happiness is that they like the same things. "We spend a lot of time outside and we like going to concerts that play music from the 40s and 50s," she said.

Their second wedding anniversary falls on a very busy day, Luella said. "It's a busy day at the senior center and later that day we have a meeting because we're representatives of the Sweden-Clarkson Recreation Center," she explained. "We might celebrate our anniversary a day early.

Jim has two sons, Michael and James. Luella has one daughter, Patricia. 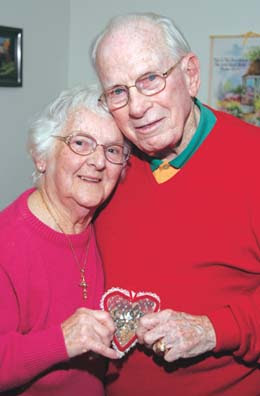 Caption: Brockport residents Luella and Jim Higgins met at the Sweden Senior Center about eight months before getting married on Valentine's Day two years ago by Justice of the Peace William P. Cody. When asked about the highlight of their time together, Jim responded, "Being together, being active and being in love." Luella added, "That surprise first anniversary party at the Sweden Senior Center." Photograph by Walter Horylev.
(source: http://www.westsidenewsonline.com/OldSite/westside/news/2005/0213/features/valentine.html)

I started "googling" their names.

In Feb 2009 Luella wrote a poem for their newsletter at the Sweden Senior Center (SSC).
"Growing old is not so bad
Just think of all the fun we had.

...Parties, proms, and movies galore,
Now who could ask for anything more?

We seniors are treated like royalty.
The four letter work we life is F-R-E-E.

A discount here, coupons there
Planes and trains lower our fare.

We are treated kindly if our hair is white,
My gosh, we must be doing something right.

We can "kick up our heels" and act like a kid
Maybe not so high as we once did.

Then I found this....
"Higgins, James F., On September 17, 2007. He is predeceased by his wife of 54 years Maryanne. Survived by his wife Luella; sons Timothy and Michael (Gail Forward); grandsons Aaron, David (Kate Gilbert), Matthew and Phillip; great-grandchildren Emalee and Trey Higgins; sister Marion Fullam; brother William and many nieces and nephews."
(source: http://www.westsidenewsonline.com/OldSite/westside/news/2007/0923/deaths.html)